“Wi-Fi has become a ubiquitous connection technology in today’s world and an important part of our daily work and life. Since the acquisition of Quantenna, ON semiconductor has become one of the global leaders in high-performance Wi-Fi solutions.

Wi-Fi has become a ubiquitous connection technology in today’s world and an important part of our daily work and life. Since the acquisition of Quantenna, ON Semiconductor has become one of the global leaders in high-performance Wi-Fi solutions.

Traditional wireless systems communicate through a single antenna at the transmitter and a single antenna at the receiver, called single-input single-output (SISO). MIMO refers to a communication system with multiple antennas at both the transmitter and receiver, thereby improving the speed of sending and receiving data and the robustness of the signal. MIMO has been deployed since the Wi-Fi 4 standard in 2009, supporting 4 x 4 (that is, 4 transmit antennas and 4 receive antennas), and supports 8 x 8 MIMO to Wi-Fi 5 and Wi-Fi 6. MIMO-enabled Wi-Fi was originally aimed at a single user, but in real life these data rate gains do not scale as expected because most client devices, especially mobile devices, have at most two transmitters and receivers, limiting space The multiplexing gain is a maximum of 2. The advent and rapid adoption of multi-user MIMO (MU-MIMO) promises to take full advantage of MIMO to multiple simultaneously operating devices. Therefore, in the home gateway, to maximize the utilization of MIMO capability, MU-MIMO is required. Quantenna, a subsidiary of ON Semiconductor, is the first Wi-Fi solution provider to support 4 x 4, 8 x 8 MIMO and MU-MIMO.

The latest 5G technology and Wi-Fi 6 both mean faster connections, but their application scenarios, operating frequency bands, network latency, and spectrum certification are very different, so 5G will not be in the foreseeable future. Instead of Wi-Fi, they complement and synergize with each other.

The 5G standard is developed by the 3rd Generation Partnership Project (3GPP) and is mainly used outdoors, and the Wi-Fi 6 standard is developed by the Institute of Electrical and Electronics Engineers (IEEE) and is more suitable for indoor use. According to the 3GPP standard, the 5G frequency band is divided into two ranges: FR1 and FR2. The frequency band of FR1 is lower than 6GHz, and the frequency band of FR2 is 24GHz to 52GHz. Since high-frequency signals are easily attenuated, more complex engineering is required. Wi-Fi 6 works at 2.4GHz, 5GHz and 6GHz. 5G spectrum needs to be licensed, while Wi-Fi 6 spectrum is license-free and easier to deploy. 5G data transmission rate is 1 to 10Gbps, Wi-Fi 6 is limited by network connection, and the transmission rate is up to 9.6Gbps. 5G supports high-speed mobile switching up to 350km per hour, while Wi-Fi 6 does not support high-speed mobile switching. 5G network latency is less than 1ms, and Wi-Fi 6 network latency depends on the core network, with a delay of 20 to 150ms.

How to Optimize Wi-Fi Performance

For Wi-Fi speeds that decrease with distance, ON Semiconductor offers 8 x 8 MIMO, 5 x 5 MIMO and beamforming technologies to extend Wi-Fi coverage. In order to solve the interference caused by adjacent Wi-Fi and other unauthorized networks, the Smart Self-Optimizing Network (SONiQ) software is provided to optimize Wi-Fi performance through Channel Selection and AP Steering. The SONiQ framework integrates a variety of routers, access points, repeaters and any other device in the Wi-Fi chipset portfolio with any system, allowing customers to control everything with a single software framework. For the situation where many different devices in the home compete for Wi-Fi, iQStream is used to implement a routing mechanism that intelligently selects paths through QoS priority. In addition, ON Semiconductor’s Wi-Fi 6 solution also supports the following features to achieve differentiated products: adaptive 8 x 8 MIMO, 8 spatial stream FB, ESP, background dynamic frequency selection (DFS), always-on DFS.

Up to 4 chains for 5GHz background scan.

Advanced hardware detects and isolates radar and sub-carriers. Stays longer than the competition on a clean DFS channel.

Quantenna, a subsidiary of ON Semiconductor, currently covers enterprises, retailers and operators in the Wi-Fi field. The products provided include access points, routers, home gateways, Mesh nodes, etc., and will soon be extended to industrial, automotive, etc. through Wi-Fi 6 , Consumer Internet of Things (IoT) fields such as smart home, home entertainment and other IoT segments.

ON Semiconductor’s solution supports faster speed and coverage, with a maximum speed of over 10Gbps, up to 8 x 8 MIMO at 5GHz, 4 x 4 MIMO at 2.4GHz, motion detection using Qdock, and support for cloud analysis.

2. Mesh nodes that comply with Wi-Fi 5 and Wi-Fi 6 standards

ON Semiconductor provides dual-band and triple-band solutions with speeds over 6Gbps, embedded in CPUs, with cost advantages, using Qdock for motion detection, and supporting cloud analysis.

3. A set-top box that complies with Wi-Fi 5 and Wi-Fi 6 standards

For the above access points/gateways and mesh nodes, ON Semiconductor provides almost “turnkey” solutions, such as Spartan for home hub/Mesh, including full-featured hardware and software design packages for authorized OEMs (OEM) and Original Design Manufacturer (ODM) to provide product design documentation, board manufacturing documentation, product housing documentation, and to facilitate OEM and ODM customization, generic pre-tested firmware and software development kits (SDK) are also provided to help OEMs and ODMs reduce cost and speed up time-to-market.

Motion detection using Wi-Fi can be applied to traditional residential monitoring to detect intrusions in and around our homes or for scheduled maintenance, which could easily be extended to smart buildings, using motion and occupancy detection for heating, ventilation, air conditioning (HVAC) and Part of the lighting control building management system, it can also be used to monitor the elderly and vulnerable people in the home for peace of mind. 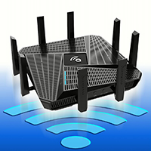 The next-generation Wi-Fi 6 standard will greatly increase connection speed and throughput, and the development of MU-MIMO technology will further enable manufacturers to fully utilize the potential of Wi-Fi. After acquiring Quantenna, a leading Wi-Fi technology leader, ON Semiconductor continues to create an overall Wi-Fi solution from silicon and systems to software with key technologies such as MU-MIMO, OFDMA, beamforming, DFS, and Qdock, to solve IoT problems. , automotive and smart home market connectivity application issues, such as the latest flagship solution Spartan routers provide excellent throughput, speed, coverage and cost-effectiveness, bringing enterprise-level performance to the smart home, comprehensive hardware and software to accelerate time-to-market.

Design of Heading and Attitude Computer Based on Programmable Logic Device

Enjoy the noble life with scientific and technological strength, and the high wind pressure of Deyi A6 creates the best kitchen