The semiconductor industry is plagued by disasters, Micron’s power outage Yu Wei just appeared, and Nippon Electric Glass was out of power again

At the beginning of December, the power outage of Micron, a major memory manufacturer in Taiwan, brought a powerful impact to the memory industry. For a time, the major module factories jointly acted and announced the suspension of orders and quotations. After clarifying the specific losses, a new round of quotations will be given.

Sure enough, Nikkei reported in a report on the 10th that the DDR4 type products used for indexing were about $2.86 per piece, about 4% higher than the price at the beginning of the month, and the main reason for the price increase was Micron’s power outage.

The Yuwei of Micron’s power outage has just begun to appear here, and there is another power outage from a major Japanese factory, and this time it looks more ferocious.

According to Japanese media reports, on the evening of December 11, the glass factory of Nippon Electric Glass (NEG), a major Japanese glass substrate manufacturer, in Takatsuki City suffered an unexpected power outage for 5 hours. The power outage caused damage to the furnace and the feeding tank. Japan Electric Glass has urgently notified major panel factories over the weekend that the supply of glass substrates will be affected next.

It is understood that the factory mainly supplies glass substrates below the 8.5th generation. The power outage caused damage to its 3 furnace plants and 5 feed troughs. It is expected to be repaired and resumed production in the first quarter. The overall impact time may be up to 4 months.

The shortage of glass substrates makes it worse

In the Display glass substrate industry, Corning of the United States, Asahi Glass (AGC) of Japan and Nippon Electric Glass (NEG) have always dominated. Among them, although the market share of Electric Glass is not as good as that of Corning and Asahi Glass, it also supplies all panel factories and is the most important second source.

As soon as the power outage occurred, LGD immediately sent people to understand the situation, and the major panel manufacturers also acted immediately to stabilize the supply of materials. One of the reasons why everyone is so nervous is that the supply of glass substrates in the second half of this year is already quite tight, and the electric glass is afraid that it will not be able to withstand such a power outage. 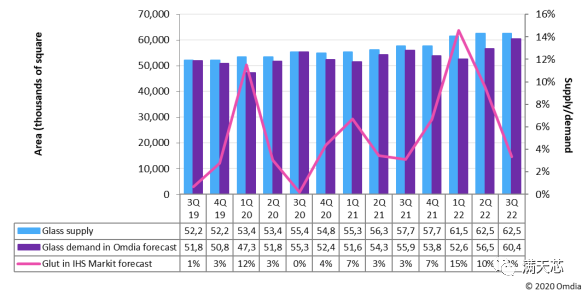 Since the third quarter, the price of panels has risen significantly. The supply side is affected by the shortage of upstream material supply and the squeeze of IT product capacity, and the actual effective supply has not increased significantly.

According to the survey data of Sigmaintell, panel prices maintained a relatively large increase in November, and it is expected that the upward trend will continue in December, and the increase is expected to narrow. The performance analysis of each size is as follows:

32″, the average price in November will increase by $3, and the price is expected to increase by $2 in December.

55″, the average price in November has increased significantly, and it is expected to increase by $5 in December.

In terms of large size, the average price of 65″ and 75″ maintained a relatively large increase of nearly 10 US dollars in November, and it is expected that the increase will be expected to fall back to 5 US dollars in December.

According to Sigmaintell’s data, the global LCD TV panel market supply is still in short supply, and the panel price maintains an upward trend. The forecast that the increase in December is expected to be narrowed may be changed by the power outage accident of Electric Glass.

The semiconductor industry is plagued by disasters

The impact of the epidemic will not be mentioned. Except for the power outage at the electrical glass factory, there seem to be a lot of natural and man-made disasters in the industry in the past two months.

On October 20, a huge fire broke out in a factory of Asahi Kasei Microelectronics Co., Ltd. (“AKM”) Nobleoka Manufacturing Co., Ltd., a group company of Asahi Kasei Group, which is engaged in semiconductor manufacturing. It is said that the fire burned for several days and nights, which directly caused AKM’s chips Prices have skyrocketed, with some models skyrocketing 22 times!

On December 3, a power outage occurred at the wafer fab of Micron, a large storage company located in Taoyuan, Taiwan, and the outage lasted for about an hour. After a power outage accident, various procedures such as inspection and repair are required, and the yield adjustment also takes a period of time, which may take several weeks to fully return to normal.

At around 9 pm on December 10, an earthquake of magnitude 6.7 occurred in the eastern sea area 27.2 kilometers east of Yilan County, Taiwan. A magnitude 4 earthquake was measured in some wafer factories of TSMC and World Advanced, and personnel were evacuated. How much of an impact it will have has yet to be determined.

It can be said that the current global semiconductor industry is in an extremely sensitive state. The impact of the shortage of wafer production capacity has already spread, and the rise in manufacturing costs has been reflected on end products. These major semiconductor factories, which play a pivotal role in the industry, will cause ripples in the industry, and even cause strong winds and waves, regardless of any impact from power outages, earthquakes, fires, or viruses in the future.

Global PC shipments reached 82.7 million units in the first quarter of 2021, a year-on-year increase of 55%