To maintain high efficiency and high system performance at the same time, it is usually necessary to add a secondary LC filter (L2 and C2) at the output of the switching regulator to reduce ripple and suppress noise (as shown in Figure 1). However, the two-stage LC output filter also has corresponding disadvantages. Ideally, the power stage transfer function is modeled as a fourth-order system, which is very unstable. If the sampled data effect of current loop 1 is considered again, the complete control-to-output transfer function is a fifth-order system. Another alternative solution is to sense the output voltage at the primary LC filter (L1 and C1) points to stabilize the system. However, when the load current is large, applying this method results in poor output voltage regulation due to the large voltage drop across the secondary LC filter, which is unacceptable in some applications.

There have been published research articles 2-5 on DC-DC converters with secondary LC output filters, specifically, Control of Secondary DC-DC Converters with Low Voltage/High Current Outputs Loop Design” and “Comparative Evaluation of Multi-Loop Control Schemes for High-Bandwidth AC Power Supplies with Two-Stage LC Output Filters” discuss the modeling and control of a two-stage voltage-mode converter (the converter). not directly applicable to current mode converters). The articles “Secondary LC Filter Analysis and Design Techniques for Current-Mode Controlled Converters” and “Three-Loop Control for Multi-Module Converter Systems” discuss the advantages of current-mode converters with secondary LC filters. Analysis and Modeling. However, both articles assume that the inductance value of the secondary inductance is much smaller than the primary inductance, which is not always appropriate in practical applications. 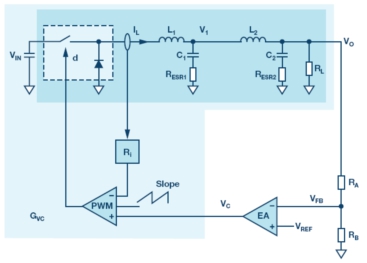 Figure 1. Circuit diagram of a current-mode buck converter with a secondary LC filter.

This article analyzes the small-signal modeling of a buck converter with a secondary LC filter. A new fifth-order control-to-output transfer function is proposed that is very accurate regardless of the peripheral inductance and capacitance parameters. A new hybrid feedback method is proposed to maintain good DC accuracy of the output voltage while providing sufficient stability margin. The limit value of the feedback parameter is analyzed for the first time, which provides the basic basis for the actual design. Based on the power stage small signal model and the new hybrid feedback method, a compensation network is designed. The stability of the closed-loop transfer function was evaluated using Nyquist plots. A simple design example based on the power management product ADP5014 is provided. With the secondary LC filter, the output noise performance of the ADP5014 is even better than that of an LDO regulator in the high frequency range.
Appendices I and II list the required small-signal transfer functions for the power stage and feedback network, respectively.

Figure 2 shows a small signal block diagram corresponding to Figure 1. The control loop consists of an inner current loop and an outer voltage loop. The sampled data coefficient He(s) in the current loop refers to the model proposed by Raymond B. Ridley in “A Novel Continuous Time Model for Current Mode Control”. Note that in the simplified small-signal block diagram shown in Figure 2, the input voltage disturbance and load current disturbance are assumed to be zero, as the input voltage and load current dependent transfer functions are not discussed in this paper. 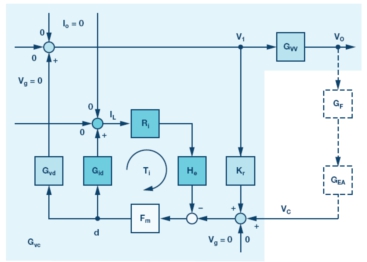 The first transfer function we care about is the current loop gain measured at the output of the duty cycle modulator. The resulting current loop transfer function (see Equation 16 in Appendix I) behaves as a fourth-order system with two pairs of complex conjugate poles, which produces two system resonant frequencies (ω1 and ω2). Both of these resonant frequencies are determined by L1, L2, C1 and C2. The load resistance RL and C1 and C2 create the main zero. A pair of complex conjugate zeros (ω3) is determined by L2, C1 and C2. Additionally, the sampled data coefficients He(s) in the current loop will introduce a pair of complex right half-plane (RHP) zeros at 1/2 the switching frequency. 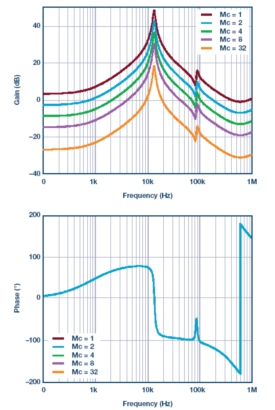 Figure 3 shows the current loop gain plot with different external ramp values. For the case without external slope compensation (Mc = 1), it can be seen that the phase margin in the current loop is very small, which can lead to sub-harmonic oscillations. By adding external slope compensation, the shape of the gain and phase curves will not change, but the magnitude of the gain will decrease and the phase margin will increase.

When the current loop is closed, a new control-to-output transfer function is created. The resulting control-to-output transfer function (see Equation 19 in Appendix I) behaves as a fifth-order system with one dominant pole (ωp) and two pairs of complex conjugate poles (ωl and ωh). The dominant pole is mainly determined by the load resistances RL, C1, and C2. The lower frequency pair of conjugate poles is determined by L2, C1, and C2, while the higher frequency pair is located at 1/2 the switching frequency. In addition, the ESR of C1 and the ESR of C2 affect the two zeros respectively.

Figure 4 shows the control-to-output loop gain plot with different external ramp values. Compared to a conventional current-mode buck converter, a pair of complex conjugate poles (ωl) is added to the control-to-output gain of a current-mode buck converter with a secondary LC filter. Additional resonant poles can provide additional phase delay up to 180°. The phase margin will drop sharply, and even with a Type III compensation system, it will be very unstable. Furthermore, Figure 4 clearly shows the transition from current mode control to voltage mode control with the addition of slope compensation. 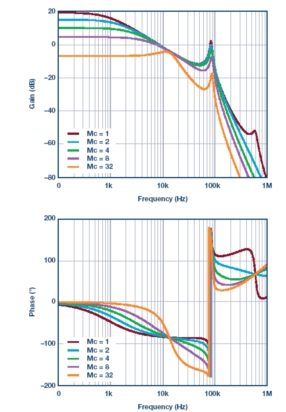 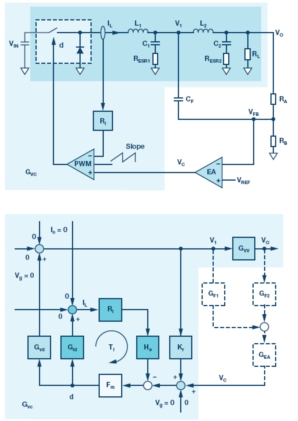 Figure 5. A current-mode buck converter using the proposed hybrid feedback approach, with the circuit diagram in (a) and the small-signal model in (b).

The transfer function of the feedback network

In addition to those in the power stage, two parameters are included in the feedback transfer function. As is well known, the parameter β (see Equation 30 in Appendix II) is the output voltage amplification. The parameter α is a completely new concept.

The feedback parameter α (see Equation 29 in Appendix II) can be adjusted to understand the behavior of the feedback transfer function. Figure 6 shows the trend of the zero point in the feedback transfer as α decreases. The figure clearly shows that as α gradually decreases, a pair of conjugate zeros will advance from the left half-plane (LHP) to the RHP. 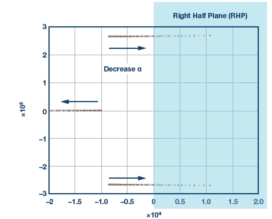 Equation 1 gives the minimum limit reference for the feedback parameter α. As long as this condition is met, the control system can easily remain stable. However, since RA and CF will work as RC filters for output voltage changes during load transient jumps, the load transient performance will be degraded by large values ​​of α. So the alpha value should not be too large. In practical designs, it is recommended that the parameter α be about 20% to 30% larger than the minimum limit. 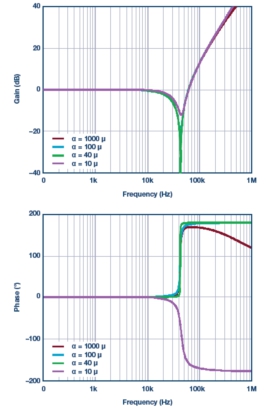 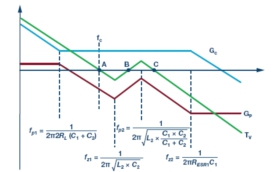 According to Figure 8, the closed-loop transfer function TV(s) has passed the 0 dB point three times. The Nyquist plot is used to analyze the stability of the closed-loop transfer function, as shown in Figure 9. Since the graph is far away from (C1, j0), the closed loop is stable and has sufficient phase margin. Note that points A, B, and C in the Nyquist plot correspond to points A, B, and C in the Bode plot. 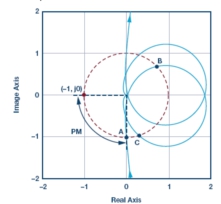 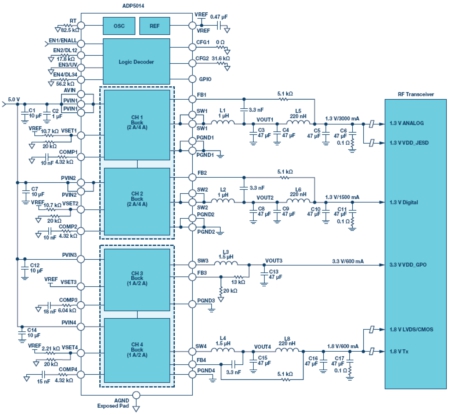 Figure 10. RF transceiver powered by the ADP5014 with a secondary LC filter.

The ADP5014 is optimized for many analog blocks to achieve lower output noise in the low frequency range. The unity-gain voltage reference structure also makes the output noise independent of the output voltage setting when VOUT is set to be less than the VREF voltage. A secondary LC filter was added to the design, which attenuates output noise in the high frequency range, especially for the switching ripple and its harmonics at the fundamental. Figure 10 shows the design details.
Figure 11 shows the noise spectral density measurements from 10 Hz to 10 MHz and the integrated rms noise from 10 Hz to 1 MHz for the ADP5014 compared to the ADP1740, another conventional 2A Low noise LDO regulator. The output noise performance of the ADP5014 is even better than the ADP1740 in the high frequency range. 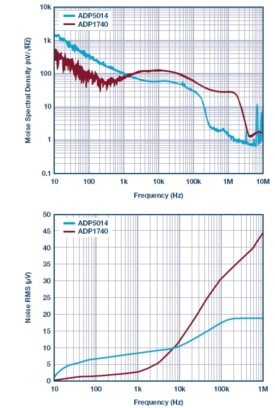 Figure 11. Comparison of the output noise performance of the ADP5014 and ADP1740. Figure (a) shows the noise spectral density and (b) shows the integrated rms noise.

This paper presents a general analytical framework for modeling and controlling a current-mode buck converter with a secondary LC output filter, discusses the precise control-to-output transfer function, and proposes a new hybrid feedback structure, And the feedback parameter limits are deduced.

Design examples show that a switching regulator with a secondary LC filter and a hybrid feedback approach can provide a clean, stable power supply with performance comparable to or better than an LDO regulator.

The power stage transfer function in Figure 2 is as follows. 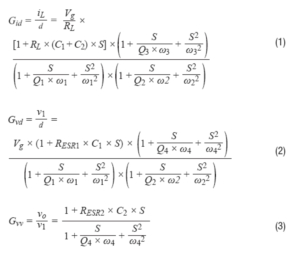 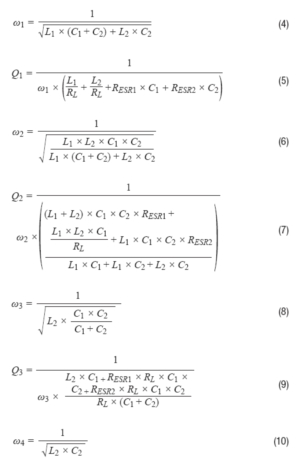 Among them: L1 is the primary inductance.

C1 is the primary capacitor.

RESR1 is the equivalent series resistance of the primary capacitor.

L2 is the secondary inductance.

C2 is the secondary capacitor.

RESR2 is the equivalent series resistance of the secondary capacitor. RL is the load resistance.

The gain block in the current loop is as follows.

Among them: Ri is the equivalent current detection resistance

Se is the sawtooth slope with slope compensation

Sn is the on-time slope of the current detection waveform

Ts is the switching period

The current loop gain is

D is the duty cycle

According to Figure 2, the gain block kr is calculated as follows

The transfer function from control to output is 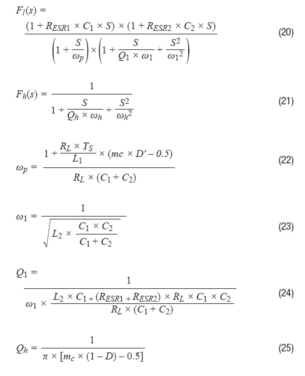 In Figure 5, the local feedback and remote feedback transfer functions are

From Equation 1 to Equation 27, the control-to-feedback transfer function is calculated as follows

Where: RA is the upper resistor of the feedback resistor divider

RB is the lower resistor of the feedback resistor divider

CF is the local feedback capacitor

The approximate feedback transfer function is

In typical low noise applications, a unity gain voltage reference structure is usually applied, so the parameter β will be equal to 1.Then, the feedback transfer function is