How to Harvest Thermal and Vibration Energy for IoT Devices

Advanced power management is the key to keeping digital technology moving fast. The use of energy harvesting solutions can be an important inflection point for IoT ultra-low power solutions.

Achieving so-called zero-power sensors requires harvesting energy from the environment. Narrowing down the selection of available energy sources, the next criteria will be the amount of energy available and required.

For example, the harvesting of solar and wind energy can provide a solid foundation for high-power solutions.

At the same time, thermal energy is often readily available from by-products from engines, machinery and other sources. Thermal gradient harvesting refers to the process of capturing ambient heat and utilizing it. Harnessing energy environmental phenomena in many ways, the use of piezoelectric devices to convert vibrations into electrical energy appears to be a proven method, which has the capacity to produce hundreds of microwatts (?W/cm2) depending on size and build density.

Harvesting energy through temperature gradients is the use of thermoelectric solutions. The use of cogeneration is limited because it requires a variable temperature input, while others can provide hundreds of thousands of hours of uninterrupted operation, but are inefficient. The thermoelectric solution is addressed by the Peltier battery module.

The material commonly used to create the p and n regions (bismuth telluride, or Bi2Te3) allows to obtain an output voltage of 0.2mV/K per cell, whereas if the thermoelectric converter uses multiple double p and n (20mV, at ?T= 10K using 10 cells), higher values ​​can be obtained. The equivalent model of the power supply is represented by a Thevenin generator with an RT output resistor, and the maximum power that can be supplied to the load is obtained by the resistor impedance adaptation Rload=RT.

The temperature difference between the two points causes thermal energy to flow from the highest temperature point to the lowest temperature point. The heat flow will persist until thermal equilibrium is reached and can be used to harvest reusable energy. The process of extracting energy from heat exchange is governed by the laws of thermodynamics.

Later, Jean Charles Athanase Peltier discovered that heating or cooling occurs by passing an electric current through the intersection of two different conductors. The direction of the airflow determines the direction of the temperature change, up or down. The amount of heat generated or absorbed is related to the current, and the proportionality constant is called the Peltier coefficient.

Mechanical vibrations are another way to provide sufficient energy to Electronic systems. The vibration of piezoelectric transducers has been widely used in energy harvesting applications in recent years by using special masses and special systems that allow movement.

Piezoelectric transducers utilize the direct piezoelectric effect, the property of certain crystals to produce a potential difference when subjected to mechanical strain. This effect occurs at the nanoscale and is reversible. In recent years, polymer plastic-based piezoelectric materials (Pvdf) have been extensively developed, and new materials and increasingly advanced manufacturing processes are constantly being sought.

The piezoelectric effect converts kinetic energy into electrical energy in the form of vibration or shock. Piezoelectric generators (energy harvesters) provide a reliable solution by converting vibrational energy wasted in the environment into usable electricity. They are ideal for applications that need to charge batteries, supercapacitors, or directly charge remote sensor systems (Figure 1). 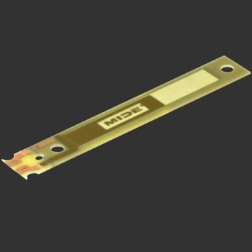 The overall performance of the system depends on many factors such as input vibration, sensor geometry and materials, mass causing vibration, electronic interface. Therefore, fast and reliable quantitative estimation of transducer and circuit junction behavior is highly desirable, even in the early design stages, to optimize the overall system.

The analysis of the piezoelectric effect can be represented by the circuit shown in the figure below.

The inductance LM is the equivalent inertial mass; the capacitance CM is the elasticity of the transducer; the resistance RM is the mechanical loss. The mechanical part is the force generated by the generator FIN, opposite the feedback force generator α-VP, which is controlled by the voltage on the output device to develop the capability of CP (inverse piezoelectric effect). At the same time, the mechanical speed ? produces the current β? The direct effect of supplying two capacitive outputs (piezo) and other possible electrical loads is connected to the sensor. Therefore, model identification involves the following six independent parameters: LM , CM , RM , CP , α and β. α and β are thermal coefficient dependent systems.

The temperature difference can be used to generate electricity, harnessing excess heat that would otherwise be lost. Waste heat from solar and geothermal systems can be collected. Emission streams from general household appliances can be used.

Suppose we use battery powered wireless IoT devices operating in an environment with thermal gradients created by the human body, ovens, motors. Without energy harvesting, the batteries of these devices would need to be replaced because they release energy, which incurs operating costs. Depending on the available temperature gradient, thermoelectric generators can generate 20?w to 10 mw/cm².

In order to design a better thermoelectric energy harvesting system, there are many characteristics to consider. Include electrical and thermal requirements, use of suitable thermoelectric materials, durability goals for specific applications, product selling price and engineering budget.

Vibration is a ubiquitous source of energy. Every car on the road will vibrate on the asphalt, in the cockpit, and if we consider the length of the highway and the large number of moving cars, the idea of ​​being able to get energy from the vibrations seems appealing.

Maxim’s MAX17710 is a complete system for low-power, high-efficiency energy-harvesting charging and protection that can manage energy-harvesting devices with output power from 1FW to 100mW. It is the industry’s first IC to integrate all functions of power management for ambient energy harvesting, charging and Protected Micro Energy Cells (MECS), a form of solid-state battery. Operating at ultra-low current levels, the MAX17710 accepts energy from mismanaged energy with output levels ranging from 100mW to 1µW to harvest energy from various sources. Examples include light (captured by photovoltaic cells), vibrations (captured by piezoelectric elements), heat captured by thermoelectric generators) and radio frequency (for example, near field communication (NFC)). 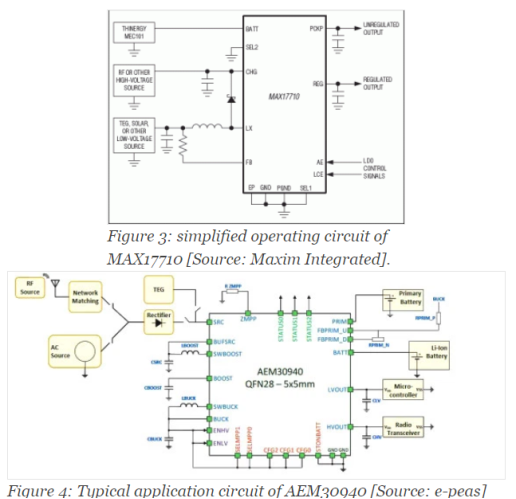 Another PMIC is the AEM30940, an integrated energy management subsystem that extracts DC energy from thermal generators, piezoelectric generators, micro-turbine generators, or high-frequency RF input while storing the energy in a rechargeable element , and provides two independent regulation voltages for the system. It integrates an ultra-low power boost converter to charge storage elements such as lithium-ion batteries, thin-film batteries or ultra or conventional capacitors. It can start operation with empty memory element input voltage to 380 mv and input power of only 3 μw.

The LTC3588-1 integrated circuit provides a complete energy storage solution optimized for high impedance generators such as piezoelectric transducers. It features a low-loss full-wave rectifier and a high-efficiency synchronous buck converter that transfers energy from the input storage device to a regulated voltage at the output, capable of delivering up to 100mA of load. It is packaged in a 3mm x 3mm DFN or 10-conductor MSE.

To effectively design a fully autonomous wireless sensor system, you need low-power microcontrollers and sensors that consume minimal power in a low-energy environment. Power solutions for such systems may include storing available mechanical, thermal or electromagnetic energy in the local environment of the sensor itself.

In the era of digital intelligence, what is the “troika” that drives the transformation and upgrading of enterprises?

After leaving Huawei, can Chu Qing lead Zhanrui into a new era?