Home » Electronic » The attack of the European semiconductor giants: how strong are they?
Electronic

The attack of the European semiconductor giants: how strong are they?

At the end of last year, the 17 EU countries announced that they would invest 145 billion euros (about 1.2 trillion yuan) in the next two to three years to promote EU countries to jointly research and invest in advanced processors and other semiconductor technologies.

Infineon, ST and NXP, as representatives of European semiconductor companies, their layout in the semiconductor industry deserves our attention.

How strong are the traditional top three in Europe?

According to the sales of the world’s top 15 semiconductor companies in the first quarter of 2021 released by ICinsights, Infineon and ST are the European semiconductor manufacturers shortlisted for this list, ranking 12th and 14th respectively. The report further emphasizes that if pure-play fab TSMC is excluded, then Netherlands-based NXP will also make the list. According to the report, in Q1 2021, NXP’s revenue will be $2.503 billion. 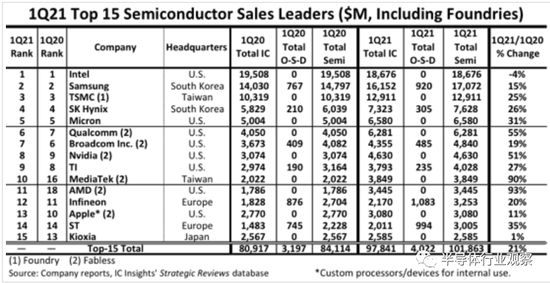 It is worth noting that in the statistics of ICinsights, Infineon and ST achieved double-digit year-on-year sales growth in the quarter. NXP is not far behind. According to its financial report, NXP increased by 27% year-on-year in the first quarter.

From this data, it can be seen that European semiconductor manufacturers still occupy a position that cannot be ignored in the semiconductor industry.

The cornerstone of the position of European semiconductor manufacturers

According to Infineon’s financial report for the second quarter of the 2021 fiscal year ended March 31, 2021, the company’s revenue in the quarter reached 2.7 billion euros, with a gross profit margin of 36.0%. 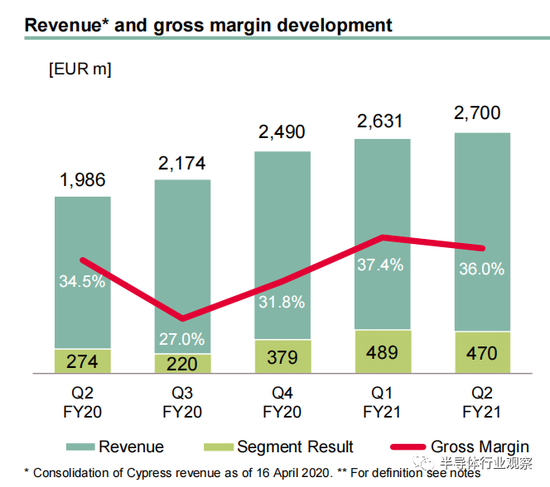 From the perspective of business division, Infineon’s ATV division has revenue of 1.219 billion euros in the second quarter, and this division is also the largest source of Infineon’s revenue. They occupy an industry-leading position in various segments of automotive semiconductors, including automotive power devices and power supply devices. In addition, in terms of industrial control, Infineon also occupies the first position in the industry in many fields. 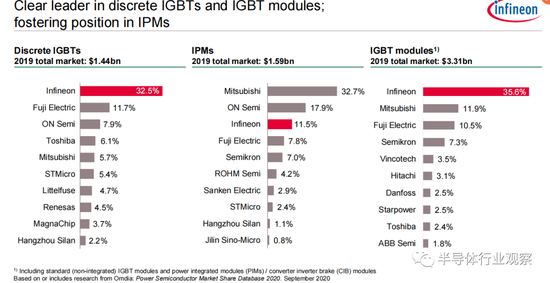 From the standpoint of STMicroelectronics, the company is divided into three divisions by product: Automotive and Discrete Products (ADG), Analog, MEMS and Sensors (AMS), and Microcontrollers and Digital ICs (MDG). ). 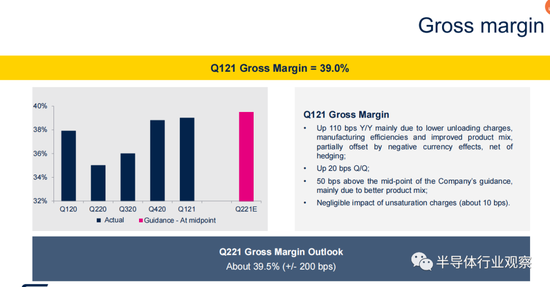 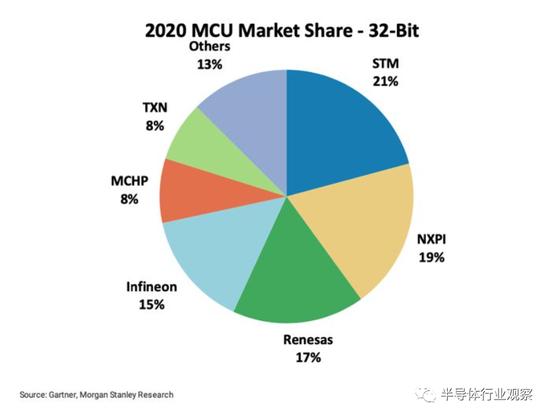 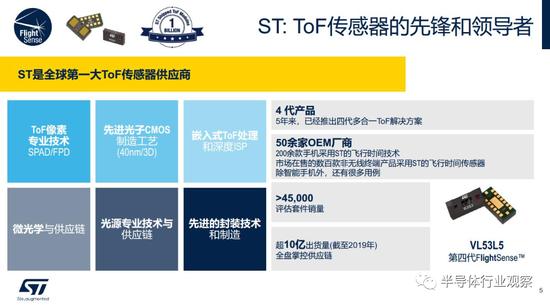 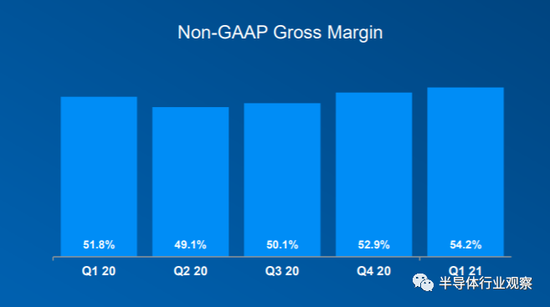 In addition, it is worth noting that the performance of Infineon, STMicroelectronics and NXP in terms of gross profit is also an important factor for them to consolidate their dominance in the segment.

Above the cornerstone, new competition

In the process of development in the past, European semiconductor manufacturers have accumulated advantages in the fields of automobile and industry. In the new round of technological iterations, the competition in the automotive and industrial fields surrounding the development of third-generation semiconductors has also entered the second half.

In January 2015, Infineon completed the acquisition of International Rectifier in the United States, integrating advanced technologies in the field of third-generation compound semiconductors (ie, gallium nitride). In 2018, Infineon acquired the Dresden-based start-up Siltectra GmbH. Siltectra has developed an innovative technology called Cold Split, which processes crystalline materials efficiently and minimizes material loss. Infineon will use cold dicing technology to cut silicon carbide (SiC) wafers, doubling the number of chips that can be produced from a single wafer.

From the perspective of STMicroelectronics’ actions, its three major acquisitions in 2020 are focused on wireless product lines, including the acquisition of SOMOS, ultra-wideband (UWB) technology company BeSpoon and Riot Micro’s cellular IoT connectivity assets. In the same year, STMicroelectronics also joined the UWB Alliance. STMicroelectronics has said that integrating UWB, a key secure positioning technology, into the STM32 product portfolio can be applied to IoT, automotive and mobile communication application scenarios to achieve services such as secure access, accurate indoor and outdoor mapping.

NXP also has a layout in the RF field. In May 2019, NXP announced the acquisition of Marvell’s wireless connectivity business for $1.76 billion. The main product lines involved are Marvell’s Wi-Fi and Bluetooth connectivity products. NXP made this acquisition mainly to strengthen its wireless communication strength in the industrial and automotive fields.

Unlike STMicroelectronics and NXP, Infineon sold its RF power business to Cree for 345 million euros after the planned acquisition of Cree’s Wolfspeed power supply and RF division was terminated. (This year, Cree announced that it will officially change its name to Wolfspeed by the end of 2021). Regarding this transaction, Infineon CEO Reinhard Ploss said: “Cree is a quality buyer of Infineon’s RF business and has a strong reputation in the industry. We are excited about the idea and prospects of the combined business. At the same time, , with the spin-off of this business, we will be able to more effectively focus our resources on Infineon’s strategic growth areas and will retain a strong technology portfolio for the wireless market.”

The emergence of new scenarios has promoted the development of new technologies. While generating new competition, these manufacturers have begun to re-examine their strategic layouts. This is especially true for European manufacturers who focus on subdivisions.

As far as Infineon is concerned, at the media communication meeting of the Infineon Automotive Electronics Developers Conference last year, Cao Yanfei, senior vice president of Infineon Technologies Greater China and head of the automotive electronics business unit, introduced that in Infineon Technologies Inc. After the acquisition of Cypress, the two companies will maximize the synergy effect, and promote the “New Infineon” to achieve “1+1> 2”.

In addition, at the third China International Import Expo last year, Infineon announced its latest investment plan in China, where the company decided to expand the IGBT module production line at its Wuxi factory. After the expansion of the Wuxi plant, it will become one of Infineon’s largest IGBT production bases. According to the Daily Economic News, Jochen Hanebeck, Chief Operating Officer of Infineon Technologies, said: “China occupies an important strategic position in Infineon’s global business. The upgrade and expansion of the Wuxi plant will not only further enhance our presence in China production capacity, and will also help Infineon strengthen its leadership in the development of the global IGBT business.”

At the same time, according to the iawbs report, STMicroelectronics also emphasized that China is one of the most important markets for STMicroelectronics, and STMicroelectronics is using a broad product portfolio and ecosystem to consolidate its domestic market leadership. In the future, ST will provide a variety of applications and customized semiconductor solutions to meet the needs of a global customer base, including many increasingly innovative Chinese customers.

From the perspective of NXP, according to previous reports from Semiconductor Industry Watch, Steve Owen, executive vice president of global sales and marketing at NXP, has said that NXP is currently in the car’s smart cockpit, autonomous driving and assisted driving. As well as in-vehicle network and other aspects, there are layouts, and the company’s partners have also expanded from traditional OEMs and Tier 1 suppliers to emerging car manufacturers.

In terms of overall layout, NXP’s current business focuses include digital instrument panels, battery management systems and radar systems in the automotive field, edge processing for secure connections in the industrial and IoT fields, ultra-wideband and security and software in the field of mobile devices. , as well as a product portfolio in the communications infrastructure sector including 5G base station millimeter wave technology.

write at the end