Bioelectrical impedance analysis is a low-cost, non-invasive technique used to measure body composition and assess clinical conditions. Bioimpedance is a complex number consisting of resistance value R (real part) and reactance value Xc (imaginary part), the former is mainly caused by the total amount of water in the human body, and the latter is mainly caused by the capacitance generated by the cell membrane. This impedance can also be represented by a vector whose magnitude is |Z| and the phase angle is φ. Phase angle plays a major role in determining body composition.

The resistance R of a conductor of cross-sectional area S and length l, and the capacitance C of a parallel-plate capacitor of surface area S and distance d are given by:

As can be seen from Equation 4 and Equation 5, the resistance and capacitance depend on geometrical parameters (length, distance and surface area), which means that they are related to the measurement system and physical parameters employed; that is, the resistivity ρ and the dielectric The constant ε is closely related to the type of material being tested (in this case biological tissue). Figure 1 shows a simplified model of the electrical properties of bioimpedance and its measuring instrument. RE considers the resistance of the extracellular fluid, RI represents the resistance of the intracellular fluid, and Cm is the capacitance of the cell membrane. The connection between the instrument and the body is made through electrodes placed on the skin. The instrument applies an excitation voltage to the electrodes and measures the resulting current. The excitation signal is generated by a digital-to-analog converter (DAC) connected to the back-end driver. The DAC is programmed by the microcontroller, which sets the signal amplitude and frequency. For current measurements, a transimpedance amplifier (TIA) is used, which is connected to a high-resolution analog-to-digital converter (ADC) for accurate measurements. The acquired data is processed using the system microcontroller to extract the information needed for analysis. 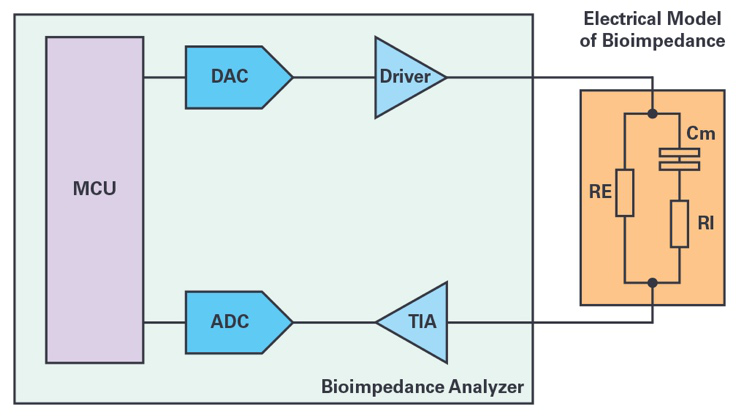 In bioimpedance measurement, the human body is divided into five parts: two upper limbs, two lower limbs and trunk. This distinction is important for understanding the measurement method used. The most common are hand-to-foot, foot-to-foot, and hand-to-hand.

During bioelectrical impedance analysis (BIA) testing, several factors need to be considered, including anthropometric parameters; namely, height, weight, skin thickness, and body shape. Other factors include gender, age, ethnicity, and (especially) the patient’s health status; ie, any malnutrition or dehydration. If these factors are not considered, test results may be distorted. Interpret measurements based on statistics and formulas that take into account the various factors described above.

When studying human body composition, we cite the three-compartment model, which includes:

From an electrical property standpoint, intracellular and extracellular electrolyte solutions behave like good conductors, while fat and bone tissue are poor conductors. 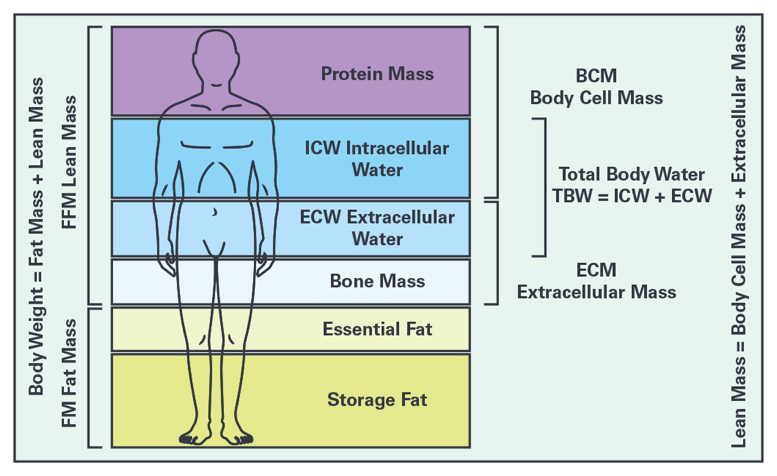 The widely used bioimpedance measurement techniques differ in the frequency of the excitation signal used. The simplest instruments are based on fixed frequency measurements (Single Frequency Bioelectrical Impedance Analysis or SF-BIA), some use multi-frequency systems (Multi Frequency Bioelectrical Impedance Analysis or MF-BIA), and the most complex instruments are range to perform actual spectral measurements (Bioimpedance Spectroscopy or BIS). There are also many techniques for evaluating the results, the most important of which are bioelectrical impedance vector analysis and real-time analysis.

In the SF-BIA instrument, the frequency of the current injected into the body is 50 kHz; this is based on the inverse relationship between the measured impedance and the total body water (TBW) (the conductive part of the impedance), which is the It consists of intracellular water (ICW) and extracellular water (ECW). This technique provides good results for test subjects with normal moisture content, but loses its validity for test subjects with drastically changed moisture content due to the limited ability of the technique to assess changes in ICW.

The MF-BIA technique overcomes the limitations of SF-BIA by performing measurements at low and high frequencies. Low frequency measurements allow more accurate estimates of ECW, while at high frequencies an estimate of TBW can be obtained. The ICW is derived from the difference between the two estimates. However, the technique is not perfect, and it has shown limitations in estimating body fluids in the elderly population with medical conditions.

Finally, BIS is based on impedance measurements, which, according to the model in Figure 1, are the resistance RE produced by the extracellular fluid at zero frequency, and the parallel connection of RE and RI at infinite frequency. At these two extreme frequencies, the capacitance created by the cell membrane appears as an open circuit or a short circuit. IF measurements provide information about capacitance values. BIS provides more detailed information than other techniques, but in this case the measurement takes longer.

Bioimpedance Vector Analysis (Bioimpedance Vector Analysis or BIVA) is a human health assessment technique based on the measurement of the absolute value of bioimpedance. It uses a graph to Display a vector representation of impedance, where the abscissa axis shows resistance values ​​and the ordinate axis shows capacitive impedance values, both of which are benchmarked according to the patient’s height. The method is based on the formula of 3 tolerance ellipses: 50%, 75% and 95%. A 50% tolerance ellipse defines a population with an average body composition. Moving along the horizontal axis of the ellipse, individuals with a lower percentage of lean body mass are identified on the right and vice versa; that is, individuals with a higher percentage of lean body mass are identified on the left. Moisture content is determined by moving along the vertical axis, trending that the upper half of the ellipse represents below-standard levels and the lower half of the ellipse is above-standard. 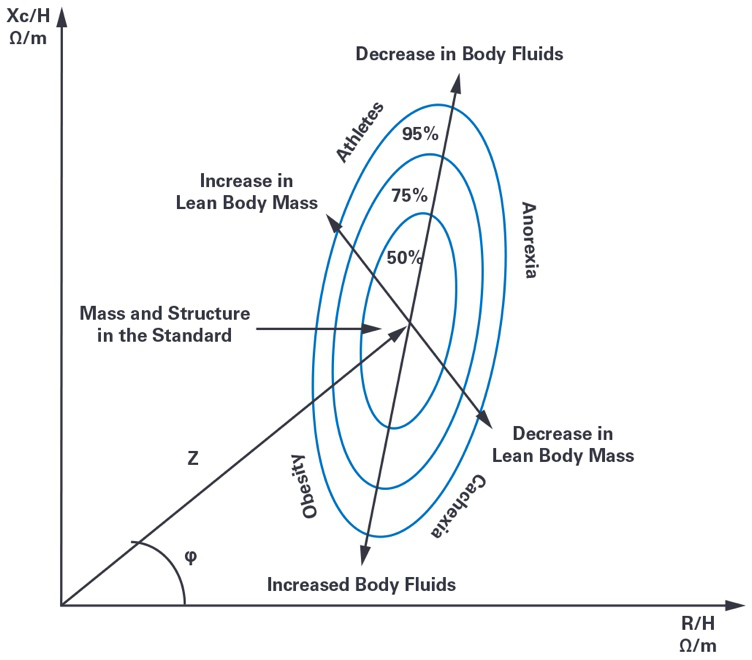 Changes in body composition during training

■Assessment of people living with HIV

Analog Devices has a broad portfolio of impedance analysis products, including devices such as the ADuCM35x, a highly integrated system-on-chip (SoC) designed for impedance spectroscopy. The recently introduced AD5940 is a high precision, low power analog front end ideal for portable applications. Specifically designed for measuring bioimpedance and skin conductivity, the AD5940 consists of two excitation loops and a common measurement channel. The first excitation loop is capable of generating a signal with a maximum frequency of 200 Hz and can be configured as a potentiostat for measuring different types of electrochemical cells. Its basic components include a dual-output DAC, a precision amplifier to provide excitation signals, and a transimpedance amplifier to measure current. This loop operates at low frequency and consumes low power, so it is also called a low power loop. The second excitation loop has a similar configuration, but is capable of handling signals up to 200 kHz, so it is called the high-speed loop. The device features one acquisition channel with a 16-bit, 800 kSPS SAR-type ADC and converter analog signal processing chain front end that includes a buffer, a programmable gain amplifier (PGA), and a programmable antialiasing filter . To complete the architecture, a switch matrix multiplexer is used, which allows multiple signals from multiple device internal or external signal sources to be connected to the ADC. In this way, in addition to the primary impedance measurement function, accurate system diagnostics can be performed to verify the full functionality of the instrument.

Figure 4 shows the connections to use the AD5940 for absolute human body impedance measurements in a four-wire configuration. For this type of measurement, a high frequency loop is used; a programmable AC voltage generator provides the excitation signal. The second generator provides the common-mode voltage for proper measurement. The current generated by the body impedance is measured by a transimpedance amplifier and converted using a 16-bit ADC. The system is capable of measurements at frequencies up to 200 kHz and provides a signal-to-noise ratio (SNR) of 100 dB at 50 kHz. Send the digital data to a hardware accelerator to extract the desired value; that is, the real and imaginary parts of the impedance.

Bioimpedance measurement is a low-cost, general-purpose method to rapidly and non-invasively assess body composition and diagnose certain types of diseases. Thanks to devices such as the AD5940, current technology enables a compact, high-performance, low-power bioimpedance analyzer that can run on battery power. The high integration, small size, and low power consumption of the AD5940 also make it particularly suitable for wearable applications.

World Peace Group, a subsidiary of the United Nations General Assembly, has launched a variety of application solutions for automotive body electronics