In the field of modern communication, beam-forming technology has a very wide range of applications. In 5G communication, phased array radar, satellite communication, etc., it has also been paid more and more attention by engineers.

Beamforming or spatial filtering is a signal processing technique used in sensor arrays for directional signal transmission or reception. This is achieved by subjecting the elements in the antenna array to constructive interference for signals at certain angles and destructive interference for others. Beamforming can be used at both the transmitter and receiver to achieve spatial selectivity. Engineers have been using beamforming techniques for quite some time, such as satellite communications, which use beams to compensate for channel attenuation. The distance between the satellite and the ground receiving antenna is very long, and the channel attenuation is very large, so the energy of the satellite signal when it reaches the ground is already very small, even lower than thermal noise. Therefore, we need to find ways to improve the received satellite signal energy. When the satellite’s signal is radiated in all directions in space, most of the energy is not received by the ground antenna, but is wasted. To avoid this waste, we use beamforming both when receiving and transmitting satellite signals. In this way, the transmitted electromagnetic wave signals are concentrated in one direction. As long as the receiving antenna can be aligned in this direction, the received satellite signal energy can be greatly improved.

The beamforming technology of phased array antennas (described in Figure 1) allows us to perform beamforming configurations for N antenna arrays linearly or two-dimensionally, and electronically, intelligently control the amplitude and magnitude of each individual antenna in the array. Phase excitation to produce a beam directed in the desired direction. When the physical structure is fixed, the phased array antenna can perform beamforming and beam scanning quickly and without inertia.

For the phased array system in the field of satellite communications, Rain Cai, an engineer from Excelpoint Shijian, a technology-based authorized distributor, introduced to us a phased array beam-forming integrated chip of ADI, which is represented by Shijian, which can be used for the vast number of satellites. Communication customers provide a new generation of systematic solutions (Figure 2). The system solution includes the multi-channel amplitude and phase control integrated chip ADAR1000 at the front end of the antenna, the on-line frequency conversion mixer LTC5548/LTC5549, the local oscillator PLLVCO integrated chip ADF5356/ADF5610, and the low-frequency 2T/2R transceiver integrated chip ADRV9009. Compared with the traditional superheterodyne method, the R&D and design of the entire transceiver system can be completed by saving dozens of chips, which greatly reduces the size and power consumption of the entire communication system.

Below, Rain focuses on the ADAR1000, the active antenna amplitude and phase control scheme at the front end of the phased array. The ADAR1000 is a 4-channel X and Ku-band beamforming chip for phased arrays. The device operates in half-duplex mode between receive and transmit modes. In receive mode, the input signals are combined on the common RF_IO pin after passing through the four receive channels. In transmit mode, the RF_IO input signal is split and passed through four transmit channels. In both modes, the ADAR1000 provides a ≥31 dB gain adjustment range and a full 360° phase adjustment range in the radio frequency (RF) path with better than 6-bit resolution (less than ≤0.5 dB and 2.8°, respectively). And support to store up to 126 beams of each channel gain and phase information, support phased array radar and communication system designers to use ESC scanning to replace the original huge mechanical steering antenna platform. Each channel of ADAR1000 integrates a low noise amplifier (or power amplifier), a phase shifter, and a variable gain amplifier. The 4-channel ADAR1000 active antenna beamforming chip can replace the 12 discrete components required for antenna phase gain adjustment and digital control, significantly simplifying the size, weight and power consumption of phased array radar systems used in surveillance and satellite communications. In particular, the use of ADAR1000 in a planar array makes planar array radars mounted on different platforms highly competitive.

The block diagram of ADAR1000 is shown in Figure 3 below. In addition to the core 4T/4R amplitude and phase control, the ADAR1000 integrated chip also includes temperature detection and power detection functions, and provides bias power supply voltage for high-power amplifier tubes and LNAs that may need to be connected externally, which will further reduce the need for engineers to design PCBs. power control difficulty and PCB size. 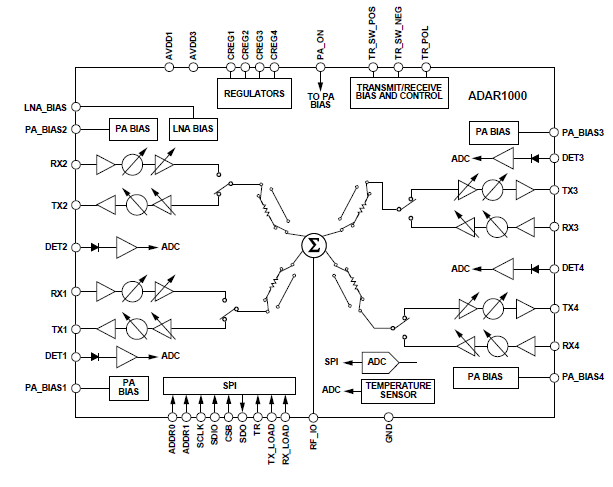 Finally, Rain introduced a specific case: an end user of Shijian wanted to reduce the overall weight of the phased array antenna by 30%. In response to this demand, Shijian recommended ADAR1000 integrated chip to him, which successfully solved the design problem. Using the 4-channel ADAR1000 to replace the original discrete component solution reduces the system size and weight by more than 30%. It makes the whole satellite system more convenient to carry ships, planes and other large transportation vehicles. The following figure (4) shows the variation curve of VSWR, phase error and Gain with frequency of ADAR1000 measured by the customer:

It can be seen from the test results that although the ADAR1000 integrates and replaces the previous 12 discrete components within the 7X7mm package size, the performance does not degrade with high integration. Customers are very satisfied with overall performance and cost. And put forward the future 8-channel, 16-channel integrated chip expectations.

ADAR1000 has excellent performance in beam-forming design of phased array antenna front-end, making this type of integrated chip a mainstream solution in large phased array radar and satellite communication applications. To this end, it can be foreseen that in the near future, multi-functional integrated chips with more channels, higher frequencies and bandwidths will be introduced to the market, and the size and power consumption of antenna arrays of multiple units will be further reduced.

About Shijian——The Leading Authorized Distributor of Components in Asia Pacific

Shijian works closely with suppliers and electronics manufacturers to position new technologies and trends, and help customers incorporate these most advanced technologies into their products. The group has R&D centers in Singapore, China and Vietnam. Professional R&D teams continue to create new solutions to help customers improve cost-effectiveness and shorten time-to-market. The complete solutions and reference designs developed by Shijian can be applied in the fields of industry, wireless communication and consumer electronics.

Shijian is a main board listed company in Singapore, headquartered in Singapore, with about 750 employees, and its business scope has expanded to more than 40 cities and regions in the Asia-Pacific region, covering Singapore, Malaysia, Thailand, Vietnam, China, India, Indonesia, the Philippines and Australia and more than ten countries. World Health Group’s annual turnover in 2018 exceeded US$1.25 billion. Shijian began to develop its business in China in 1993. Its China headquarters is located in Hong Kong, and has 11 branches and offices, R&D centers and logistics centers, and its business covers many cities and regions in China.