The difference between future vehicle positioning algorithm and GNSS

Most of today’s navigation and positioning systems rely on the Global Navigation Satellite System (GNSS). The combination of GNSS, odometer, and inertial sensors can achieve better accuracy and robustness. For cars that want to achieve autonomous driving, there are higher requirements for the accuracy and reliability of positioning. In general, the vehicle is driven on the road. Considering this situation, we choose the odometer as the first input, and when the wheel speed cannot be obtained, the input of the inertial sensor is used. Finally, particle filtering and Bayesian methods are used to fuse map information instead of standard map matching. A large number of experimental results show that the performance of the positioning system without GNSS is almost the same as that of the system with GNSS.

The goal of the current positioning system is to serve people, to provide the current position for the navigation system, or to collect vehicle status data. We specifically discuss the specific concept of “Localization Algorithm” for several reasons. First of all, “algorithm” refers to software development. Compared with positioning systems that rely only on GNSS information, there are already enough sensors or data information available, and positioning performance has made a big leap.

Second, positioning is a service required by many systems, not a single system. Third, we avoided the word “navigation” because this is just one use case for localization algorithms. Finally, the concept of “location” is more accurate than the concept of “positioning”, because a so-called true latitude and longitude positioning is meaningless if the map and the surrounding environment cannot be guaranteed to have the same absolute accuracy.

The figure above shows the data flow of future vehicles. A notable trend is the autonomy of vehicles and the application of advanced driver assistance systems (ADAS). Therefore, it is imperative to improve the performance of positioning and velocity estimation systems. From the perspective of the development of the car, the changes in the actuators (such as braking, steering, engine torque, etc.) are small, while the number of sensors has increased dramatically over the past few decades, such as:

Sensors such as vision, night vision, radar, and sonar are used for environmental perception to ensure that the vehicle is driving in the correct lane and to ensure the following distance;

Databases such as road map information are used for map matching etc.

All the aforementioned scenarios apply sensor fusion technology, and there are also some instances where sensor fusion is used to calculate state quantities or objects that cannot be directly measured or identified, such as camera-based obstacle and pedestrian detection; tire pressure using wheel speed sensors and the estimation of road adhesion coefficient, etc. Our approach relies on signal data processing techniques, vehicle kinematic models and sensors. It should be noted that the road map information is nonlinear and cannot be approximated by a linear Gaussian model, so the particle filter (PF) architecture is better than the Kalman filter (KF) algorithm. The sensor fusion architecture is shown in the figure below.

This section discusses the need to improve the performance of localization algorithms, focusing on the areas of autonomous driving and mapping.

The future of autonomous driving is highly dependent on localization algorithms. On the one hand, under the promotion of DARPA, existing smart cars are mainly based on lidar for positioning. However, this solution is expensive, and the lidar installed on the roof greatly affects the design of the vehicle, such as aerodynamic characteristics, aesthetics, etc.; on the other hand, we have also seen the use of differential GPS, including obtaining information from multiple antennas and cameras Unmanned vehicles with yaw information estimates show extremely high performance in areas with high-resolution maps (such as the Audi RS7’s autonomous driving demonstration in Hockenheim, Germany).

Autonomous vehicles require high reliability for localization. Positioning algorithms must be able to function properly when GNSS signals are lost or inaccurate in tunnels, parking lots, city streets, canyons, etc. If only GNSS can’t solve the position information, but can solve the pseudorange information, using multi-model filtering and map information limitation for positioning is also a solution. For general indoor driving, long tunnels, etc., the focus should be on map-assisted positioning technology without satellite signals.

For localization, a priori map information is known, or it can also be derived from sensor data. Usually accurate vector maps are very helpful for positioning, including some road signs, speed limit signs, etc. can be obtained from the database.

Map matching is a method to improve localization performance, where the positions estimated by various sensors are projected onto the nearest road. There are two problems with this method: first, the map does not take into account the actual topographic information, which may cause the positioning point to jump from one road to another; second, the combination of the vehicle’s motion dynamics and map information is not optimal Excellent. The purpose of this subsection is to introduce several different approaches, which we call dynamic map matching. This includes combining motion models, sensor models, road models, etc. in nonlinear filters. The difficulty lies in matching the trajectory of uncertain disturbances such as noise and disturbance to the map. Figure 4 describes several principles, from which it can be seen that relatively accurate positioning information can be obtained only through odometer and map information.

The most basic principle of dead reckoning is to integrate the speed or acceleration signal, which can be based on the vehicle model or not. For example, it can use IMU data or wheel speed data. We analyze the dead reckoning from the following aspects:

Odometer, or dead reckoning based on wheel speed sensors

Based on the kinematic model of position X, Y and heading angle ψ, the velocity observation

As the input signal, we have the following dynamic model with noise

This model has the form

Inertial sensors can measure information such as speed and acceleration. In theory, these values ​​can be integrated to obtain position, speed and heading. Using inertial sensor-based dead reckoning combined with map matching can correct some errors of the sensor and obtain more accurate positioning.

The nonlinear filtering generally used for localization consists of the following main steps:

Time Update: Leverage the motion model to predict the vehicle position when the next measurement arrives

5. Fusion localization based on Bayesian filtering

Nonlinear filtering is a branch of statistical signal processing that is concerned with the problem of estimating state from a time-based set of measurements. The most general problem it solves is computing the Bayesian conditional posterior density. There are several different algorithms for computing the posterior density. KF solves a class of filtering problems in which the model is linear and the noise is Gaussian noise. For nonlinear problems, the model can be linearized first and then KF filtering is used, that is, extended Kalman filtering (EKF). If the Gaussian approximation assumption holds, there are also processing methods that do not require linearization of nonlinear models, such as Unscented Kalman Filtering (UKF) assuming that the posterior conforms to a Gaussian probability density distribution at each step. A big problem with these methods is that they only work well if the posterior density is very Gaussian.

Constraints on roads actually result in a multimodal posterior density distribution (anchors may be on this road or a nearby road on the map, etc.). Therefore, the Gaussian distribution assumption of the probability density function is not appropriate. Another completely different nonlinear filtering method is particle filtering, which approximates the probability density function by finding a set of random samples propagating in the state space, and replaces the integral operation with the sample mean, thereby obtaining the state minimum variance distribution. Although the probability distribution in the algorithm is only an approximation of the real distribution, due to its non-parametric characteristics, it gets rid of the restriction that the random quantity must satisfy the Gaussian distribution when solving the nonlinear filtering problem, and can express a wider distribution than the Gaussian model. It also has stronger modeling ability for the nonlinear characteristics of variable parameters.

Depending on the specific model, it is also possible to combine KF and PF. The idea is to divide the state space into two parts, if one part can satisfy the Gaussian distribution assumption, it can be processed with KF, and for the other part, PF is used. The filtering and positioning algorithm based on PF can refer to the following table: 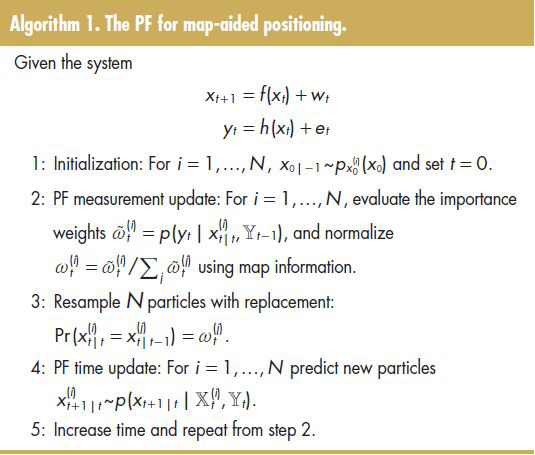 This section introduces the application of inertial sensors such as accelerometers and gyroscopes in dead reckoning and sensor fusion.

Pure integration or dead reckoning has high requirements on sensor accuracy, and such an expensive inertial sensor is unacceptable for production vehicles. The problem with low-cost sensors is that the real-time bias and drift of their sensors are not known and cannot be removed. For example, in the direction of the vehicle along the longitudinal axis, the sensor error and the road gradient will be reflected in the longitudinal acceleration, which can be considered as a time-varying unknown deviation, and the position obtained after integrating twice will produce a large position deviation. This is a difficult thing to solve for pure inertial navigation positioning that is not based on GPS.

For the following state quantities

is a quaternion vector,

is the position vector,

is the velocity vector in the body coordinate system,

is the acceleration vector in the body coordinate system.assumed

The figure below shows the result of fusing the IMU and GPS data collected by a Google phone based on EKF filtering. 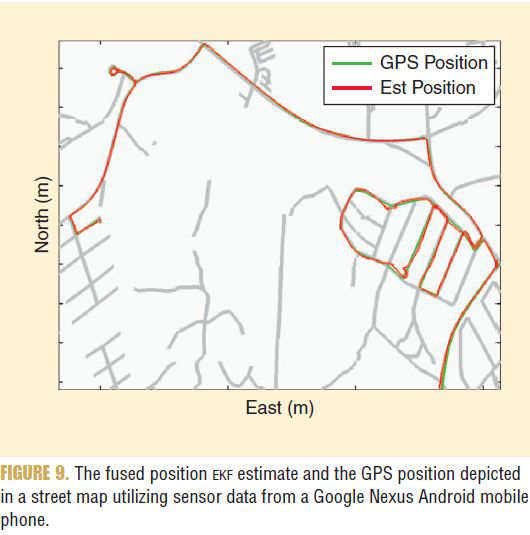